This is the first group project for Rain King Studios in a while, so they are noticeably excited to work together again, and to create work for a game that fits so well with their style of dynamic comic-inspired artwork.

Scott Prime said, “As a gamer, I have played Supershow since 2014 and even have my own Scott Prime character in the game. Now I am not only part of the game, I am doing art for it. Beyond excited!!!”

“It’s a great opportunity to reach an audience that may have never seen my work before. Also, I’m able to work in a genre that is new and exciting for me,” Shawn Wilson said.

Rain King Studios is looking forward to creating more artwork in the future for Supershow. An official reveal of the artwork will take place on the Taskforce: Geek show soon.

Supershow the Card Game by SRG Universe, Inc. is a collectible wrestling card game where players select a competitor and race to hit a finishing move before their opponent. But if their opponent kicks out of the pin, the crowd gets on their feet and the challengers battle it out again! More information about Supershow is here: https://supershowthegame.com/

Members of Rain King Studios worked together first on Rough Cut, issues one and two. The Rough Cut project led to a spotlight on KFOR Channel 4 in Oklahoma City, and a featured spot in Diamond Comics Previews with Dirk Hooper’s cover art. In 1995 Shawn Wilson, Scott Prime, Robert Henry and Dirk Hooper joined forces to create the pin-up comic Bad Girls, and worked on several additional projects as a group. In 2005 the group had a “Bad Girls” art show at the Electric Chair Gallery where work from that issue, and additional work was displayed. The members of Rain King Studios have established themselves in illustration, photography, graphic design, and marketing in the last 25 years and have joined together again to work on new projects together. 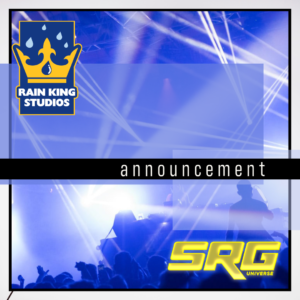